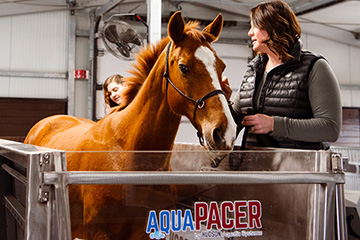 Unbridled Equine, a rehab and performance training facility in Batavia, Illinois, utilizes aquatic therapy, with Hudson’s AquaPacer Plus underwater treadmill, in the treatment of various injuries. Recently, owners Kate Wallace and Katie Hawkins used the AquaPacer as part of a treatment program to rehab Twoey, a polo horse who suffered a spiral fracture to his left front radial bone after being kicked by another horse. With a 50/50 chance of a successful recovery, Kate and Katie worked with Twoey’s vet to follow a strict rehab plan.

Twoey’s rehab consisted of being cross tied in a stall for 8 weeks followed by 6 weeks of stall rest. Five months after the injury, Twoey was cleared to exercise in the AquaPacer. Sessions were completed 3 times per week for 3 months, initially working with the water up to his belly, making him as buoyant as possible and putting minimal strain on the healing leg. Twoey started his sessions at 2 minutes, with warm water at a height just over the injury site, and a speed of 1.8 mph (his natural gait speed). Treatment times were increased as Twoey’s condition improved. Twoey walked 30 sessions total, with treatment focusing on returning strength and mobility to the injured leg and increasing activity tolerance after spending extended periods with minimal activity during the healing process.

Following a strict rehab plan executed by Unbridled Equine and Twoey’s vet, Twoey made an incredible comeback from his injury and was able to make a full recovery. He is expected to play polo this summer before he retires.