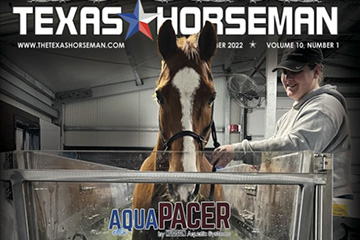 Unbridled Equine, a rehab and performance training facility in Batavia, Illinois, utilizes the AquaPacer Plus underwater treadmill in the treatment of a variety of injuries. Recently the AquaPacer was used in the rehabilitation of Bluer than Blue J (Blue), a 7-year-old half-Arabian horse who competes in Western Pleasure riding. Blue suffered a fractured hock after casting in his stall in May 2021, leaving his future in the show ring questionable. The Unbridled Equine staff and Blue’s vet worked together to develop a strict rehab plan with the goal of a full recovery.

Blue’s treatment consisted of four months of stall rest, after which he was cleared for hand-walking. A portion of the hand-walking sessions were used to train and desensitize Blue to the AquaPacer in preparation for utilizing the underwater treadmill in the next step of rehab. After a few weeks of hand-walking, Blue was cleared to begin water treading.

Blue began his AquaPacer regimen in hot water (promoting muscle relaxation) at a height just above the hock for maximum buoyancy, reducing stress placed on the newly healed fracture. The speed was kept to a very slow walk pace starting with two-minute sessions to increase his fitness and comfort level. As Blue progressed, the treadmill speed and session times increased, with a maximum session time of 20 minutes. Blue completed 20 sessions in the AquaPacer during his stay at Unbridled Equine.

After following the rehab plan designed by Blue’s vet and Unbridled Equine, Blue made a full recovery. He has returned to the show ring, where he has won multiple championships and will compete in the US Nationals in October.

For more information about Hudson Aquatic Systems AquaPacer and AquaPacer Plus
As seen in the October 2022 issue of The Texas Horseman
Read the Unbelievable Comeback article about Blue’s championship journey in NHA U.S. Nationals 2022