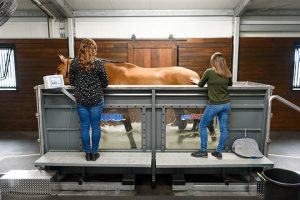 Many people associate the use of Hudson Aquatic Systems’ AquaPacer underwater treadmill system with the rehabilitation of equine injuries. Unbridled Equine, in Batavia, Illinois, utilizes the AquaPacer Plus as one of the first approved modalities in a rehab horse’s schedule but has developed a successful “pre-hab” program for equine performance athletes.

Prehab is participation in therapy-based movements and exercises in order to avoid injury or decrease pain. It is known as a proactive approach and can address deficits in strength, stability, range of motion, balance and overall joint function.

“We started 7-year old Baileys in our performance program in November, and even though he was actively being ridden and shown, he lacked the strength of a true equine athlete,” said Katie Hawkins at Unbridled Equine. “We saw typical gait imbalances and underdeveloped hindquarters which led to compensatory patterns. After just one month in our pre-hab program, using the AquaPacer 3-4 times per week, Baileys had a significant improvement in his stamina and musculature. We were able to strengthen his hindquarters and top line which improved his flexibility and adjustability under saddle.”

The AquaPacer allows you to adjust the water level and treadmill speed, as well as temperature to customize each workout. “One thing we like most about the AquaPacer is that we are able to vary the workout each day, often within the same session,” said Hawkins. “We fill the tank up above his hocks and tread him for 10 minutes. Over the next 10 minutes we lower the water height incrementally so that when the workout is complete, the water height is down to his fetlocks. As an added bonus, we are able to drain the machine, switch to the cold salt water and allow him to soak as a way to take care of any post workout inflammation.”

Unbridled Equine believes that using the AquaPacer as part of a pre-hab program will help prevent the need for future rehab, which is the goal for all equine athletes.

Learn more and Contact Hudson about how you can add an AquaPacer underwater treadmill system to your facility for pre-hab, rehab, conditioning, training, and wellness.